Buy it now at Duclos Toys

For millions of years, Autobots and Decepticons have waged war against one another for control of Cybertron. Today, you can bring home some of their biggest heroes with the Transformers Generations Voyager Figures! These exciting toys transform from a vehicle (or dinosaur) to a robot that measures roughly 8-inches tall. Get your Cybertronians now! Ages 5 and up. 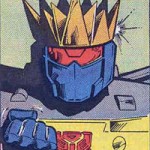 Grimlock is the most fearsome and powerful member of the Dinobots. Grimlock can be cold, merciless and contemptuous of those he considers beneath him, such as human beings, and at times, even Autobot leader Optimus Prime himself, who Grimlock would gladly supplant as Autobot leader if he were able to, giving him a superiority complex as indicated by his Generation 1 tech specs. Nevertheless, he is a valiant warrior whose actions command respect from all who are witness to them, both friend and foe. One of his most distinguishing features is his famous speech impediment, which leads him to shorten sentences and refer to himself constantly as “Me Grimlock”, never “I” (e.g. “Me Grimlock no bozo! Me KING!”) – the reason for this varies from depiction to depiction, with some making it the result of true mental limitations, and others vocal processor damage or a ruse Grimlock perpetrates to allow others to think of him as less intelligent than he actually is.

Grimlock is among the strongest of the Transformers, possibly an equal to, or even superior to Optimus Prime and Megatron in certain continuities (he was shown to be stronger than Megatron in the G1 cartoon, but in the Marvel comics, Megatron was able to defeat Grimlock and the rest of the Dinobots in their initial encounter). In Tyrannosaurus rex mode, his powerful jaws can snap virtually anything that comes between them – from steel cables to a Decepticon limb. He also can shoot an energy ray from his mouth. In robot mode, Grimlock wields an energon sword, whose blade is sheathed in crackling energon and can slice a 2-foot-thick (0.61 m) concrete wall in one slash. He also uses a double-barreled, self-propelled rocket launcher. He is almost invulnerable in his Tyrannosaurus Rex mode as shown with his battle with Megatron due to Megatron’s primary weapon, his arm-mounted fusion cannon having little or no effect on Grimlock.

Buy it now at Duclos Toys