It’s the official stand for all of your modern-era Star Wars figures! The Star Wars 3 3/4-Inch Action Figure Base Pack Stands are the same stands that were packed with the 2006 and early 2008 Star Wars basic action figures (figures sold separately), featuring a movie name and two pegs on each stand.

Each pack contains the following 40 stands:

Each stand can be personalized with the included character-name label sheet! You’ll find a label for nearly every figure released in the Star Wars action figure line line from 2004 through the end of 2007, with multiple labels for trooper figures. Buy a bunch – and keep your figures standing tall! Desk diving will be a thing of the past with a few boxes of these great display bases, which are compatible with nearly every Kenner and Hasbro Star Wars action figure released between 1995 and today. 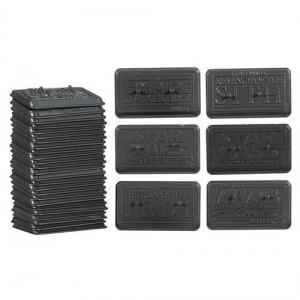